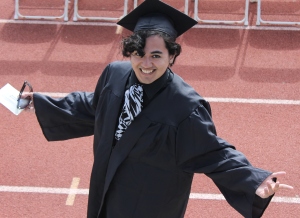 Last week, my nephew Derick joined the ranks of the estimated 1.78 million students that graduated from college in the U.S. If there’s one piece of advice I could give him now, along with the rest of the class of 2012, it would be this: the most valuable lesson you’ll need to become successful was NOT part of your college curriculum.

Back in 1984, Mark McCormack, founder of International Management Group (IMG) and touted by Sports Illustrated Magazine as “The Most Powerful Man in Sport”, authored What they don’t teach at Harvard Business School. McCormack himself is well-educated – a graduate of Yale Law School – as well as a frequent lecturer at Stanford and Duke. But he is the first to admit that “what they don’t teach you [in business school] is what they can’t teach you.”

Without a doubt, education and training contribute to one’s success. But raw knowledge is useless unless put to practical use. McCormack calls it street smarts, “the ability to make active positive use of your instincts, insights and perceptions.” Some refer to it as “soft skills,” a nebulous set of attributes that you either have or you don’t. Period.

I dub it the X Factor, an amalgam of positive attitude, people skills, and extraordinary flexibility.

Don’t Ever Tell Me You Can’t
When Celia Ruiz-Tomlinson moved to the U.S.in 1968, she had $300 in her pocket and a degree in Civil Engineering from Mapua Institute of Technology in Manila. Although she grew up in impoverished conditions, living in a 10×10 fish market stall that doubled as the family’s home, she managed to rise from abject poverty, overcoming one roadblock after another in pursuit of her dream. She is now President and CEO of Rhombus, PA, a successful civil engineering consulting firm in New Mexico. In 2002, she received the Asian Women in Business Entrepreneurial Leadership National Award, and in 2004, was recognized for her entrepreneurial acumen at the Filipinas Magazine Achievement Awards. She wrote a book about her exploits, aptly entitled Don’t Ever Tell Me You Can’t.

Positive attitude – the belief that no matter what, things can be done – is so critical that it is the first item on the checklist for AirForce Survival Training and Military Bootcamp. Laurence Gonzales, author of Deep Survival and contributing editor for National Geographic, says that in a crisis situation, Positive Mental Attitude (PMA) is the biggest determining factor for who survives and who dies. Perhaps Mahatma Gandhi put it best. He says that, “If I believe I cannot do something, it makes me incapable of doing it. But when I believe I can, then I acquire the ability to do it, even if I did not have the ability in the beginning.”

Win Friends and Influence People
There’s an often quoted story of a young woman who dined with William Gladstone one evening, and with Benjamin Disraeli the next. They were prominent British statesmen of the 19th century, both serving as Prime Ministers at one point. They were also bitter rivals. Asked her impression of these two powerful men, the young woman replied, “After sitting next to Mr. Gladstone, I thought he was the cleverest man inEngland. But after sitting next to Mr. Disraeli, I thought I was the cleverest woman inEngland.”

Personal magnetism, it seems, has more to do with being genuinely interested in other people rather than being “interesting.” Dale Carnegie, who wrote the grandfather of all people-skills book, How to Win Friends and Influence People, says that to succeed in life, you have to “Try honestly to see things from the other person’s point of view.” First published in 1937, Dale Carnegie’s flagship book continues to rank in the New York Times Best-Selling Business Books of all time. Carnegie says that success is due 15 percent to professional knowledge and 85 percent to people skills. His training organization, founded in 1912, has a 12-week program revolving around 30 principles that focus on how to become a friendlier person, win people to your way of thinking, and be a leader.

Dance with the Winds of Change
The Bible tells the Parable of the Reed and the Oak. The Mighty Oak Tree, with its deep roots and firm standing, refused to dance with the wind, while the Lowly Reed bent this way and that, even with the slightest of breeze. Ultimately, the Oak Tree was toppled in a storm because of its refusal to compromise,

Even IBM has found flexibility to be the key to success, especially in the rapidly changing automotive industry. Responsiveness to change and adaptability to evolving situations allows big automotive companies and small mom-and-pop businesses survive and succeed – to dance with the winds of change. As Elbert Hubbard says, “The world is moving so fast these days that the man who says it can’t be done is generally interrupted by someone doing it.”